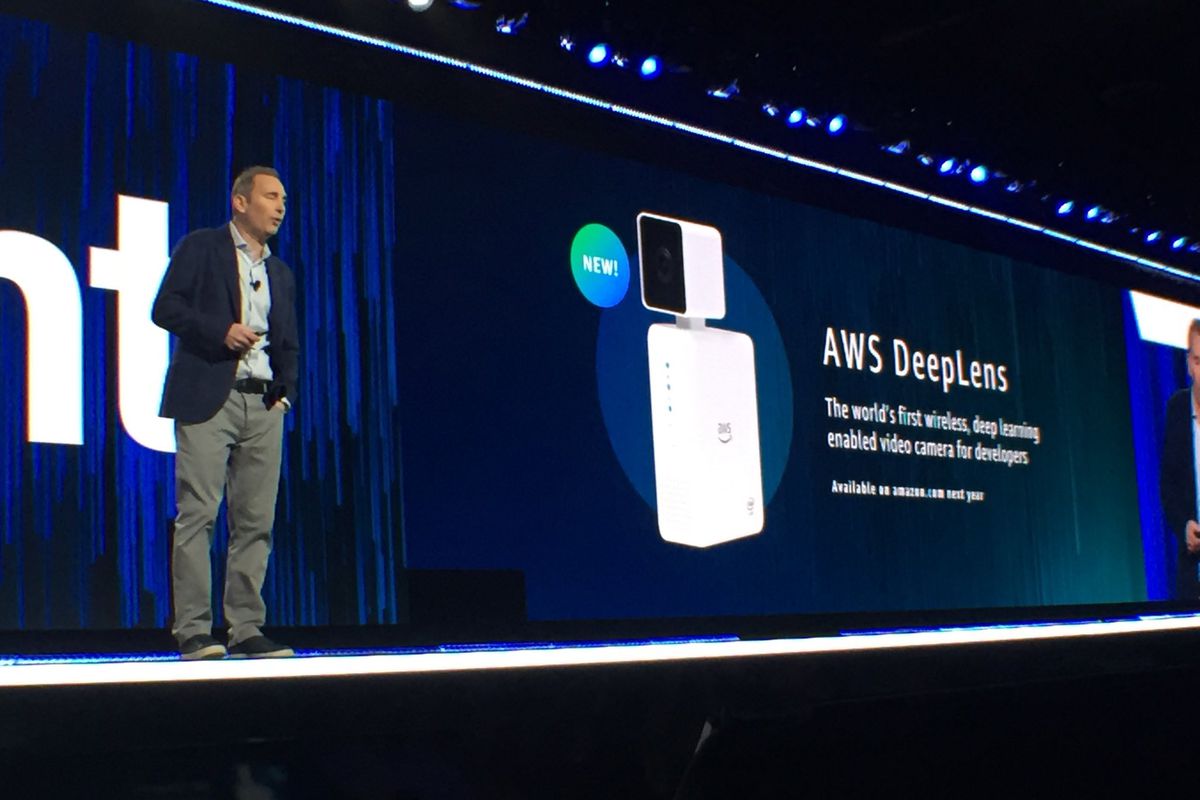 Amazon wants companies to take advantage of artificial intelligence — and, more importantly, it wants to sell them the tools to do so.

Today, the online retailer’s business subsidiary, Amazon Web Services (AWS), unveiled a suite of new products to help with this goal. Chief among them is a $250 AI-powered camera called DeepLens; a new platform for developing and deploying machine learning algorithms named SageMaker; and services for AI-powered transcription and translation. With these and other tools, Amazon is making it clear that during the current AI boom, it wants to be the one getting rich shelling shovels. At the same time, these announcement show it butting heads with rival Google, which has been busy building its own AI enterprise stack.

Of the announcements made today at AWS’ re:Invent conference, the DeepLens camera is perhaps the most intriguing. Like Google Clips, it’s a camera with on-device AI functionality; but unlike Clips, it’s aimed at developers, not consumers. DeepLens ships with a number of AI tools pre-installed, including optical character recognition, and image and object recognition. “These will help you detect cats and dogs, faces, a wide array of household and everyday objects, motions and actions, and even hot dogs,” said AWS in a blog post. (Yes, that is indeed a Silicon Valley joke.)

For your average company, DeepLens means being able to test and develop new vision-based AI functionality much more quickly. For example, if you’re running a warehouse and want to automatically scan inventory, you might buy a number of DeepLens cameras to do the job. You could then use Amazon’s pre-trained AI to recognize basic items, or train your own model and load it onto the cameras. Each DeepLens captures 1080p video and audio, and is powered by an Intel Atom processor. For connectivity and exporting data there’s also Wi-Fi, USB, and a micro HDMI port.

As you’d expect, DeepLens will be tightly integrated with other cloud and AI services sold by AWS. In the same way that Apple makes its products work together in order to lock customers into its ecosystem, Amazon wants developers to get all their AI tools in one place.

To further this aim, the company also unveiled SageMaker — an “end-to-end machine learning service” that helps data scientists build, train, and host AI services. It supports the most popular frameworks in the machine learning industry (including Google’s TensorFlow, Facebook’s Caffe2, Pytorch, and MXNET) and will essentially allow developers to go from finding the data they need to train their AI model, to shipping it to customers, all without leaving the program. And to top it off, Amazon also announced new AI-powered transcription and translation tools, which will be direct rivals to Google’s own.

But what does this all really mean? Well, most likely, it means that AWS — already one of Amazon’s most profitable revenue streams — could make a lot more money. The subsidiary is already the industry leader in selling server space to companies around the world, and if the demand for AI tools continues to increase, it’ll add to that business. With products like Alexa, Amazon has shown it can do AI; now it’s going to sell those smarts to others.

In the last quarter, revenue for AWS was up 42 percent compared to 2016, totaling $4.58 billion and beating analysts’ expectations. (Although its growth was flat compared to its previous quarter — suggesting it’s explosive expansion may be slowing down, just a tda.) And when asked if AWS could eventually become the largest enterprise tech company outright, beating out established giants like Oracle, CEO Andy Jassy told CNBC ahead of today’s announcements: “It’s possible.”